The Pretoria Jewish community has accumulated a rich history, set high communal standards, produced men and women of outstanding quality and developed and achieved an illustrious reputation for the creation and maintenance of Jewish life that has been recognised and appreciated far and wide. Religious orthodoxy has probably never been stronger or more accessible while secular interests compete for equal attention on the communal calendar – and so may it continue. Looking back, how one would like to have been a fly on the wall on Yom Kippur in 1891 when Mr. D. M. Kisch delivered an address before a large congregation of over one hundred worshippers. His topic was the need for the purchase of a Sefer Torah to cater for the religious needs of what was now close to 700 souls. With the generosity of Sammy Marks not only was a Torah acquired but in October 1897 a start was made on the construction of an outstanding synagogue in Paul Kruger Street (then Market Street), glorious in design and breathtaking in concept. Dominated by two glorious Moorish, minaret-capped turrets, the matching arches and stained-glass windows presented an eye-catching spectacle of colour, grandeur and elegance that paid fitting tribute to the fast-growing and spiritually-minded community.

But trouble was a-brewing! A mere 14 years later the then secretary saw fit to accuse the Reverend of incompetence in the manner in which he tutored the children which resulted in a call for the former’s resignation! The stigmatised secretary immediately upped and left, followed by 120 loyal followers who established an independent congregation under the banner of the Adath Israel Congregation. The leaders of the original Hebrew Congregation sought reconciliation with the proposal that a new Beth Hamidrash should be constructed in the yard of the Paul Kruger St. Synagogue for the use of both congregations. At a special General Meeting, a new executive was elected comprising members of both former committees and sanction was also given to the erection of the proposed building. Turmoil returned in 1926 when two candidates pitted against one another for the hallowed position of President resulting in the one vocally stating his inability to even think of competing against the other. This sentiment was supported by a good number of the congregants resulting in the unopposed candidate leaving the meeting accompanied by some loyal followers. This group hired premises in van der Walt St and launched the Adath Israel Synagogue in 1927, finally building their own shul at the corner of Dorlas and Vermeulen Streets which eventually closed its doors in December 1957. The two congregations were finally re-amalgamated in 1958 under the banner of the Pretoria United Hebrew Congregation with the erection and opening of the Great Synagogue in Pretorius Street on Sunday 7th September 1952. The consecration, before 1700 people, was undertaken by the Chief Rabbi of Israel, Dr. Isaac Helevi Herzog. 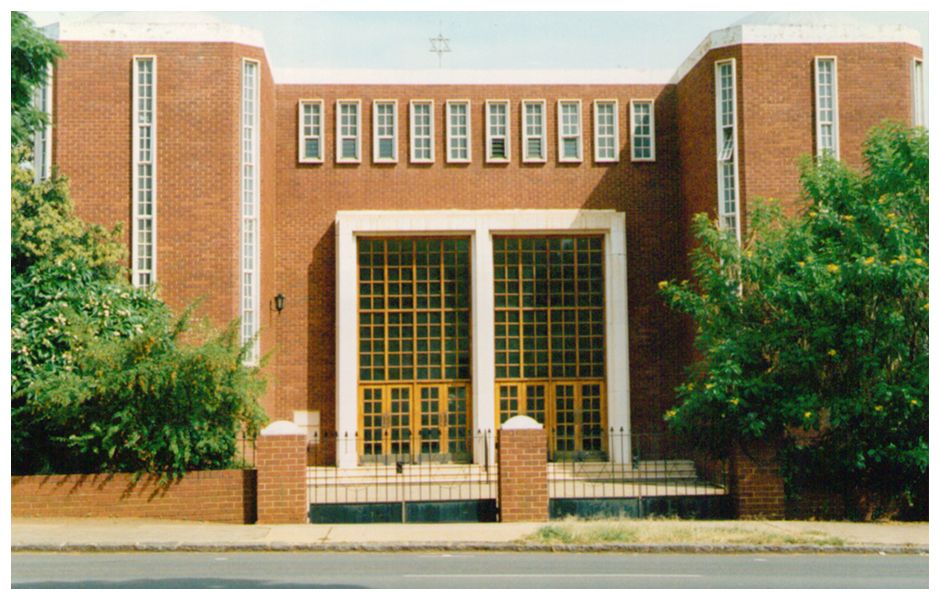 Under the leadership of Cantor A. Zwick, the choir sang “Pischu Li” and “Mah Tovu” followed by the lighting of the Eternal Light (Ner Tamid), then circuits with the nine Sifrei Torah, culminating in the presentation of a new Sefer Torah. More than 500 people attended the reception at the Beatrix St. Memorial Hall after the service. In 1958 The PHC together with the Board of the Talmud Torah resolved that a Jewish Day School be established in Lukas Rand, and Carmel School became the focal point of Jewish life within the community. A multipurpose hall was constructed at the school which served as the school hall, a communal hall and the new Adath Israel Synagogue, with the official opening in March 1966. In 1999, with the encouragement of Rabbi Michael Druin it was resolved to erect a new Synagogue in Groenkloof in recognition of the practical demography of the community. On Thursday, the 11th of January 2001, the new Pretoria Hebrew Congregation Synagogue was finally consecrated and celebrated with immense pride in an ecstatic display of joy and gratitude.